Castle Cary first appears in recorded history after the Norman invasion in the eleventh century, though there is evidence that the site was occupied, and probably fortified, before this. During the middle ages it appears in various documents under different names: Cari, Cary, Castra Cary, Castell Cairoc and Caricastel. Like a number of other settlements in the area, it takes half of its name from the River Cary that rises at the foot of Lodge Hill. ‘Caer’ means ‘rock’, ‘crag’ or ‘castle’ in various Celtic languages, and so the river may be named after its point of origin, but this is only speculation. The castle, meanwhile, certainly existed by 1138, when it was besieged by King Stephen in the course of the struggle for the throne of England with his cousin Matilda; it was besieged again in 1152. An excavation of the site in 1890 found the foundations of a large stone tower, but only the earthworks remain today; by the mid-fifteenth century the castle had been abandoned by its owners in favour of a large (and doubtless less draughty) manor house nearby, and the stones were probably used for other buildings in the town. 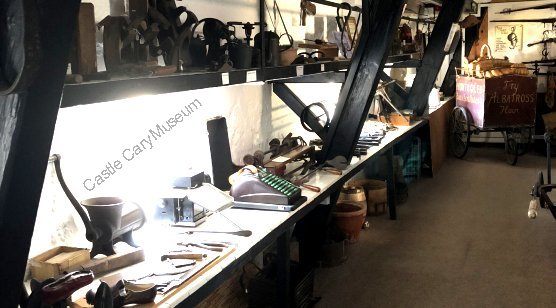 The museum is located within the historic Market House, a distinctive mid-Victorian building in the centre of Castle Cary. We have a large collection of domestic and agricultural implements, archaeological and historical information and artefacts.

We are open on Bank Holidays when possible.

There is no admission charge but donations are welcome.

The sixteenth-century English historian William Camden mentioned Castle Cary in his Britannia, a description of the kingdoms of England, Scotland and Ireland, first published in 1686:

…Castle Cary, where William Lovel Lord thereof held against King Stephen in the behalfe of Mawd the Empresse, right inheretrix of the Crown of England, whose issue failing in the time of King Edward the Third, by heire female it came into Nicholas de S. Maure, a Baron (of a distinct familie from that which was a few lines before mentioned), and shortly after about the time of Henrie the Fift by an heire female againe to the Lord Zouches of Harringworth, as a moitie of the lands of Lord Zouch of Ashby de la Zouch, came before by coheires to the house of this S. Maures. But when John Lord Zouch was attainted by King Henry the Seventh for assisting King Richard the Third, this Castle was given by the King to Robert Willoughby Lord Brook, as his lands at Bridge-water to the Lord Daubney, and then he was restored in bloud.

As Camden describes, during the middle ages the manor of Castle Cary passed by marriage from the Lovels to the St Maurs and then to the Zouche family, who lost it after backing the wrong side in the struggle between Richard III of York and the Tudors. The settlement developed as a market town – it received a formal market charter from Edward 1V in 1468 – and also as the location of a large number of rural industries, including a flourishing woollen industry. A cheap, coarse and hard-wearing cloth known as cauri-maury was made here for the poor – it is not clear whether this material was wool- or linen-based. All Saints’ Church dates from around 1470, and the original George Hotel was constructed around the same time (though subsequently rebuilt after a fire). The original market house was constructed in about 1616.

In the late sixteenth century, in the face of the threatened Spanish invasion, a muster roll for the town lists seventeen billmen, eight archers, four pikemen and one gonner (or ‘hand gunner’), and a number of gentlemen who could provide armour for the troops. This suggests that Cary was a substantial and flourishing settlement. During the English Civil War in the next century, a Parliamentary Army en route from the siege of Sherborne Castle to Bristol stripped the church roof of its lead for musket balls and threw down the bells. In 1651 King Charles II is said to have stayed in the town, at either the old Manor House or a house in Fore Street, following his defeat at the Battle of Worcester on 3rd September of that year; the Monarch’s Way, a long distance footpath which follows the King’s escape route, passes through Castle Cary.

By 1700 Castle Cary was one of the principal cloth-making towns of the area, now making good quality cloth. With the collapse of the wool industry by the end of the century, linen weaving took its place. We can see something of life in Cary in the eighteenth century through the famous diary of the Rev. James Woodforde, who was born in nearby Ansford in 1740 and who regularly visited the town – you can find more information about him from the Parson Woodforde Society webpage. We also know that John Wesley, the founder of the Methodist movement, preached in the town on various occasions. The town lock-up, known as the Round House, was built (or probably re-built) on Bailey Hill with charitable funds at a cost of £23 in 1779.

From the late eighteenth century, considerable changes took place in the town. The Donne family established flax mills making things such as twine, sailcloth and webbing – a highly successful linen business, which changed sites several times. This success is reflected in the building of Florida House for John Stephens Donne in 1877 – Castle Cary’s largest and most architecturally ambitious building. Another notable industry was the weaving of horsehair which was developed by both the Mathews family and more notably John Boyd. Horsehair cloth was used particularly for upholstery and Boyd’s factory still exists, weaving the cloth on late-nineteenth century looms; the firm is celebrating its 175th anniversary in 2012, and you can find much more about its history on the website. Castle Cary Cricket Club was founded in 1837 and is still going strong; in 1900 it supplied five players to the Devon & Somerset Wanderers team that won the first and only Cricket Olympic medal, an event which was celebrated in 2012 in parallel to the London Olympics. Between 1840 and 1855 the National School in Church Street was built and the Church was renovated and enlarged. The Market House was rebuilt as it is today in 1855 in anticipation of increased trade due to the eagerly awaited railway station.

Castle Cary became and remains an important railway junction, linking the south coast to the main London to Penzance line. On 3rd September 1942 a bomber wrecked a goods train at Castle Cary Station as well as demolishing the signal box, killing a signalman, and destroying the Station Hotel. Today, it is best known to tens of thousands of music fans as the main station for the Glastonbury Festival.

Over the last 50 years the town has expanded to the north, but the centre has changed little. The streets are still recognisable from old photographs, and many fine nineteenth-century shop-fronts survive, even if the names on some of them have changed.